Tutorial for mixing Gilsonite or with refined bitumen:

How to add gilsonite or bitumen to refinery bitumen:

Types of methods for adding Gilsonite:

1 – Before adding Gilsonite, the bitumen is heated and then natural fire is mixed with it.

2 – The most common method of adding natural bitumen is to add it to the asphalt mixture in PLANT BATCH or MIXER DRUM machine.

Bitumen can be added as a free or dry stream or solid granular granules. Also in the form
Weighing should be added to plastic melting bags, either in bulk or by screw feeders.

Best of all, Gilsonite is added directly to the refinery bitumen tank.

The temperature of the refinery bitumen is approximately 170 ° C and there is a constant rotational motion to create uniformity throughout the tank, and natural bitumen is added from the top of the tank.

This product is easily soluble with mild mechanical agents. To solve it faster, you can use a powerful stirrer that has a rotary generator with a vortex mode.

Gilsonite is easily compatible with hot compounds and mixtures and does not require specialized equipment in the addition operation. 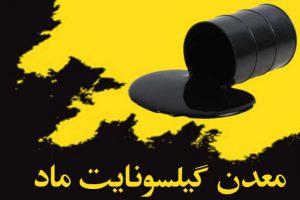 Mixing Gilsonite with refined bitumen is the simplest and best method. In this method, a tank with a propeller that creates the necessary turbulence is required. The bitumen in the tank is swirled in a vortex motion by a butterfly.
The best choice for combining LIGHTNING or electric mixers. If the dust concentration in the tank is high, it will cause the engine to explode.

Natural bitumen should be added slowly to the bitumen vortex (VORTEX). An important condition is that during the spin, the refinery bitumen is also pumped hot and rotating into the tank.

The most important principle is that the minimum temperature is between 170 and 175 degrees Celsius. Ignoring this issue increases the stirring time. It takes 2 to 4 hours to mix 5% to 10% Gilsonite with refined bitumen.

This is a good feature for adding bitumen, which is always between 5 and 18 percent. Dry mineral bitumen should be added slowly to hot bitumen.

If the addition occurs too quickly, a phenomenon (UP BALL) may occur at its surface. In this case, stimulant compounds should be used to disperse them.

If a horizontal cylindrical tank is used, the place to add bitumen (charging valve) should be between half a meter and 1 meter in diameter. Bitumen should also be added slowly and gently stirred with a butterfly mixer or hand mixer.

Therefore, in order to prevent the UP BALL phenomenon from occurring for Gilsonite, it is necessary to stir the composition and create a disturbance in the composition.

Recirculation is very important to homogenize and completely dissolve the solution. If mixing in a horizontal tank, it is necessary to mix Gilsonite and refinery bitumen with reciprocating rotations (from front to back and vice versa).

Normally, when the amount of bitumen is high, more time is needed to mix. Unfortunately, when mixing refinery bitumen with mineral bitumen, there are no tests or checklists to determine if the refining bitumen and gelsonite are sufficient.

However, large lumps of natural bitumen should not be seen on the composition. The best way to determine whether gilsonite is completely dissolved in refinery bitumen is to compare the degree of penetration of the product bitumen with the primary refinery bitumen.

When gilsonite is added to refinery bitumen, it reduces the degree of penetration and increases the viscosity and softening point.

The characteristics and advantages of refinery bitumen mixed with Gilsonite are as follows:

1- Reducing the finding of grooves (wheel rejection) and other problems that cause the destruction of asphalt during traffic It is heavy and is caused by hot weather.

2 – reduce the thermal sensitivity of bitumen; Therefore, it causes its good performance at high temperatures and also less damage at low temperatures.

3 – Adding bitumen is very easy. Mineral bitumen can be added directly to hot bitumen or mixed with asphalt.

5 – Another advantage is the use of Gilsonite as a MODIFIER. This advantage can be important during the hot asphalt production process and often to solve polymer problems.

6 – Ease of combining Gilsonite with other hot compounds
7 – Stable form of solution that remains constant during storage.
8- There is no need to change the way asphalt is applied.

Production of tar from natural bitumen

The exploration and speculation operation of the Maad mine ended

Waste disposal of Maad mine

Extraction of Gilsonite based on the power of Maad specialists